PUTTING OUR FAITH INTO ACTION

Claremont United Church of Christ is part of the United Church of Christ, a mainline Protestant tradition. We can't wait to welcome you to one of our worship services! You will find a friendly congregation where you can think for yourself and grow spiritually. We believe in putting our faith into action to care for our community and world. 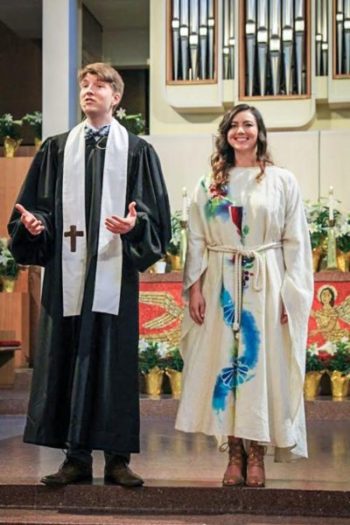 Inspired by the Holy Spirit, we unite on our spiritual journeys to discern God’s still-speaking voice, embrace all people without exception, celebrate God’s presence in worship, and pursue Christ’s vision of peace, love, grace, and justice.

In response to God’s creating, redeeming and sustaining love, we unite for the worship of God and the service of all. We seek to know the will of God and to walk in God’s ways made known in Jesus Christ; to love one another; to proclaim the Gospel to all the world; to work and pray for peace and justice; and to live in harmony with all creation. We trust the presence of the Holy Spirit in trial and rejoicing and the promise of eternal life both now and for evermore. Amen.

Why might CUCC be a good fit for me?

Are you seeking a religious life in which both your heart and your mind are actively engaged? The progressive theology at Claremont UCC honors the authority of the individual conscience, validates the findings of science, supports an ethical outlook, and respects the integrity of other faith traditions. Progressive theology dares to ask hard questions, avoids easy certainties and knows that God is always more than we can imagine.

We take scripture seriously, which means that we do not always take it literally.

Can I take Communion?

YES! Our table is open, because it is not our table, but Christ’s table, and Christ invites everyone.

Claremont United Church of Christ, Congregational, was organized in 1891 as the Claremont Congregational Church under the direction of founding pastor Charles Burt Sumner. For fifteen years, the congregation met on the campus of Pomona College. In 1900 the congregation called Dr. Henry Kingman, who served as pastor for 17 years.

In 1906 the first building was dedicated on the site where the Henry Kingman Chapel now stands. In 1928, the Guildhall was added to accommodate the growing congregation. At this time the church was called The Claremont Church or Claremont Community Church.

After the second world war, the congregation built the current sanctuary. Theodore Criley was the architect, and contributing artists included Millard Sheets, Albert Stewart, Jean and Arthur Ames, David Scott, Harrison McIntosh, Phil Dyke, Betty Davenport Ford, and Sam Maloof. In 1955, the sanctuary building was dedicated and the top floor of the Guildhall was remodeled to make larger classrooms for the growing Sunday School.

After the completion of the Sanctuary building, Kingman Chapel was dedicated in 1963. In 1966, the congregation voted to join the United Church of Christ.

In the 1970s, the Guildhall and Sanctuary were redecorated and repainted. 1992 was the church's centennial celebration. The following decade, the congregation voted to become Open and Affirming, whereby all persons are accepted regardless of their race, background, or sexual orientation. The Sanctuary was again remodeled with the addition of the new organ, sound system, lighting and acoustical work.

Through the years, CUCC members have been leaders in the community serving as Council Members and heads of various commissions. The establishment of Pilgrim Place, Mount San Antonio Gardens, Oak Park Cemetery, and Casa Colina were all the result of the congregation’s efforts.

The long and remarkable history of Claremont United Church of Christ demonstrates that God's dynamic Spirit is alive and moving. We can't wait to see what the future brings!